In 2005 I traveled to Lisbon to continue writing songs for “NO STRAIGHT LINES.”  I was considering moving there at the time, where I thought I might try to set up a European legal practice representing high-end clients needing advice on U.S. intellectual property law.  I met with several of the largest Lisbon firms and explored various strategies with them, made a few friends I still keep in touch with today, and wound up doing a few Portuguese deals afterwards as result, but eventually decided against the move.  I was also hoping to meet up with Mafalda Arnauth on that trip to see if she might be interested in singing on the album, but she was out of the country on tour.

But all was not lost, of course, because I was there mostly for Fernando Pessoa.

Tucked away in a corner of Praça do Comércio (back behind the red trolley car in the photo above), the main square of Lisbon that fronts the Tagus (i.e., Lisboa’s version of St. Marks’ Square in Venice), one can find the illustrious Restaurant Café Martinho da Arcada, Pessoa’s favorite haunt.  I of course needed to eat there at least once, though I chose not to try the juliana soup (see below), cod and fried eggs with cheese Pessoa usually ingested there.  I can’t remember what I had, but it was probably the grilled sardines or caldo verde, neither of which I could ever get enough of in Lisboa.

I am in the process of re-reading one my favorite books of all time, Fernando Pessoa’s remarkable “The Book of Disquiet.”  Pessoa’s work has been swirling around my head ever since I first discovered him in the early 1980s.  I often read Pessoa while I was working on “No Straight Lines,” and plainly see his influence on certain lyrics on the album, especially I suppose “At The End Of The Day.”  But it has been now more than 10 years since I last read cover-to-cover this tour de force of prose.  I’m savoring it page by page.

For anyone who has never encountered the amazing work of Fernando Pessoa here is an exquisite short poem of his from 1933 found in “Poems of Fernando Pessoa” (translated and edited by Edwin Honig and Susan M. Brown), Ecco Press, one of my very favorites:

To be great, be whole; exclude
Nothing, exaggerate nothing that is you.
Be whole in everything. Put all you are
Into the smallest thing you do.
The whole moon gleams in every pool.
It rides so high.

I owe my discovery of Pessoa to Dori Caymmi who, at a feijoada at John Pisano‘s years ago (more on that subject and John later), told me Pessoa was his favorite poet in the Portuguese language.  That led me to first read Pessoa’s poetry, and later everything of his I could ever get my hands on.  This being back in the 1980s, a fair amount of his work still wasn’t readily available in the U.S. in English translation then, including “The Book of Disquiet,” though that has changed.

It turned out that I had already by then heard a fair amount of Pessoa without knowing it.  It wasn’t until I traveled to Lisbon in 2005 that I discovered the album “Various Artists – A Música em Pessoa”

and realized I had been listening to these songs for years without knowing the lyrics came from Pessoa — songs by Jobim, Edu Lobo, Dori and his sister Nana Caymmi (my favorite female singer from Brasil, at least from the MPB era) and many others I knew so well.  Vicente Soto Sordera”s “Pessoa Flamenco” is another great offering, showing Pessoa’s influence extending into the flamenco realm.

I’ll write more about Pessoa later.  I’m far more interested in his literary output than others’ use of his work as lyrics, but it’s gratifying to see the world embracing this visionary poet and thinker. 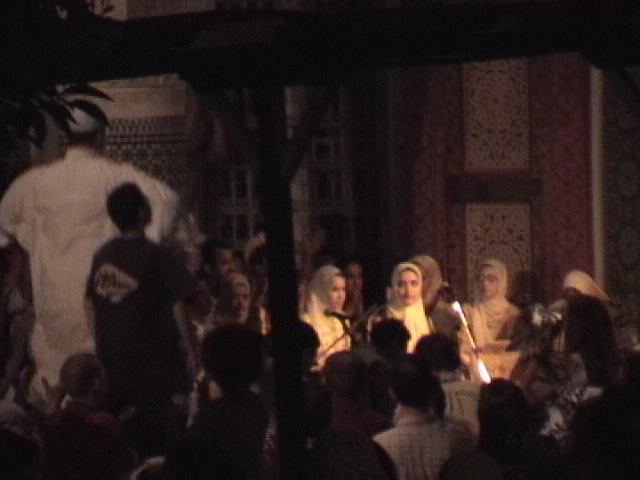 Every night long after the formal Fes Festival concert ended an informal, unadvertised concert series took place in a courtyard in the Medina known as “Sufi Nights.” I hear it may no longer take place. If so that’s truly a shame because many of the most memorable musical performances I heard in Fes that year took place there.

During the performance I videotaped above, about halfway into the song a few Sufis leaped up from where they were sitting and starting dancing ecstatically. The guy in the white djellaba was so huge, easily 300 pounds, way outsizing anyone around him. It was really moving to see him jumping up and down so joyfully, it already being about 1 a.m.   There is a documentary out that features music and footage from the 2002 and 2004 Fes Festivals (http://www.soundofsoul.org/show.asp?content_id=14402) that incorporates footage of this same guy that very night.

But for me by far the most memorable Sufi Night jam was the one the last night of the festival. From my travel journal:

The final evening of the festival the local Sufi group from Fes was scheduled to play and the moment was extraordinary. All of the space anywhere near the stage had been taken by those of us willing to sit on the hard ground for a couple of hours in wait, most of whom were locals and probably Sufi. The week before, the U.S. government had released the first images from Abu Ghraib, which Donald Rumsfeld had warned were going to be superseded the following week with even grislier images. The local police had swept the streets before the festival, but given Moroccan hospitality it is no surprise there was nothing resembling any tension between anyone in Fes, and particularly not in the medina, which seemed infused with an eternal calm. Around 1:00 am we heard the blaring zurnas announcing the musicians’ arrival. They had decided to enter the courtyard playing and had already reached a fevered pitch by the time they snaked through the crowd directly in front of me. One of them carried a burning brazier and a handful of sparks blew into my face as a drummer tipped the head of his darbuka too close to the coals trying to raise its pitch. There is no finer thing than to be a musician.

Any album represents a journey. This particular one more or less began in May of 2004 at the Fes Festival of Sacred Music. Every evening long after the concert ended the most incredible jam sessions occurred in a private garden inside the medina, where each night a new Sufi group from a different region in North Africa played its trance music for hours. Afterwards I stumbled home through the dark alleyways and lay in bed unable to sleep, reading Rumi and Hafiz, Mohammed Choukri, Driss Chraibi and others. Holed up every day inside the medina at Riad Al Bartal to avoid the scorching mid-day heat I embarked on this journey working on the first of many songs I would compose for this album.

It was an amazing couple of weeks. I spent a lot of time hanging out with Alecia Cohen and her circle of world music journalists, who were great company. Earlier that year returning from MIDEM I sat next to Alecia on the plane from Cannes to Paris and we discovered we were both going to be going to the Fes Festival and kept in touch. At that point she was still running her magazine Global Rhythm, which was one of the sponsors of the festival that year. She later wound up moving to Morocco, she loved it so much, where she started a travel company called Travel Exploration.

Fast forward to 2011, in the overdub phase of “No Straight Lines,” my wife and I spent a couple of weeks travelling throughout Southern Morocco with Alecia and Hossaine Amiri booked through Travel Exploration. It was great getting another chance to hear a bunch of Gnawa and Berber music again and inspiring to finally make it that part of Morocco I’d read so much about. The photo below is of our bivouac out in the Sahara, as the sun was finally fading from view.   What a world, what a world.